The University of Cambridge, announced yesterday that they have adopted a 1.5°C ‘Science Based Target’ for carbon reduction. The target claims to commit the University to reducing their energy emissions to absolute zero by 2048, with the aspiration of being a decade ahead of their target at all times.

This commitment is a small step forward for a University that has long been complicit in fuelling climate breakdown. However, it is totally inadequate and masks a number of damning shortcomings. They do not cover the full range of the University. Their scope is limited to just Scope 1 and Scope 2 emissions. They are not ambitious enough to be in line with global equity and justice. Most importantly, they fail to address the University’s complicity in supporting the actions of the fossil fuel industry.

As the richest University in Europe, Cambridge has an overwhelming moral responsibility to the words poorest communities who are disproportionately affected by climate breakdown to take radical action. They must commit to a 2030 zero carbon target and full divestment from fossil fuels. You can find out more information on the target from the University here.

In this blog we will break down the details of the new target and why they are so inadequate.

The University’s performance against their previous targets:

The new targets are disappointingly unambitious:

The University has committed to targets developed in consultation with the ‘Science Based Targets Initiative’. The Initiative seeks to set targets for individual institutions in line with the global carbon reductions needed to keep global warming below a certain degree of warming. Cambridge University have committed to a pathway aiming to keep global emissions below 1.5 degrees. However, the 1.5 degree pathway is based on just a 50% probability of limiting peak warming to 1.5 degrees.

The University has committed to a pathway that accounts for regional variances in the carbon reduction necessary across the world. But according to the SBTs own methodology: “The SDA method intrinsically accounts for regional differences regarding level of activity and carbon intensity, but not explicitly in relation to regional resources or historical responsibility and capability… The SDA method does not take into account considerations of equity or fairness across different countries”(more information here). According to academic research, the United Kingdom has made the largest contribution to global warming and thus has the highest historic responsibility to reduce emissions out of any country worldwide. Moreover, Cambridge University is the wealthiest University in Europe, with much of its wealth accumulated through slavery and colonialism. It hence has a particularly enhanced ability and responsibility to take action to combat climate breakdown. Therefore, the pathway the University have committed to, despite adjusting for regional variances, underestimates the level of ambition it would be equitable and just for Cambridge to commit to.

The University has committed to a 2038 zero carbon aspiration, reflecting ‘the aspiration of being at all times, a decade ahead of the SBTs’. However, they have failed to set a date for phasing out gas. In its response to the Divestment Working Group Report, University Council accepted recommendation 15, committing that: ‘The University should source 100% of its energy from renewable sources by 2030’. Student representatives on the Environmental Sustainability Strategy Committee (ESSC) pushed for the University to commit to this, but the target has been watered down and the University looks very unlikely to commit to phasing out gas by 2030.

The targets are extremely limited in range:

The targets do not include any of the Cambridge Colleges. None of the Colleges to date have signed up to carbon reduction targets. To the public, the perception is that ‘the University’ comprises the academic portion of the University, plus the Colleges, and this grouping allows a fairer comparison with other UK universities. 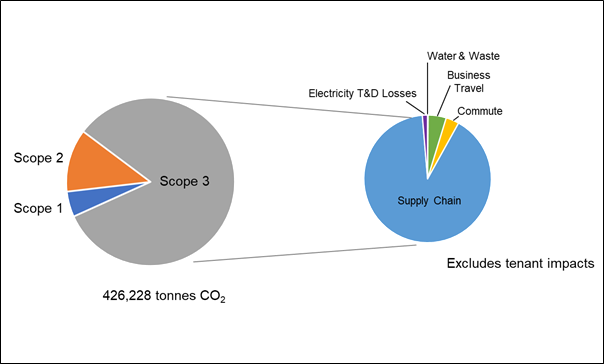 The failure to include Scope 3 emissions:

The University have not committed to any scope 3 carbon reduction targets, merely adopting the qualitative target of improved reporting of emissions.

The University’s Environmental Sustainability Strategy Committee ‘aims to recommend scope 3 targets in the next academic year’, yet it is unknown how or when they will be taken on and implemented.

The University’s continued support for the fossil fuel industry:

The University has faced mass pressure to commit to full divestment from fossil fuels in recent years. Hundreds of academics have signed open letters, students have occupied administrative buildings, and 16 MPs including John McDonnell have backed the campaign. The University rejected divestment, but in the past few months has been pressured into reopening discussions and exploring a divestment plan following calls from a historic 324 academics who signed a motion.

It is clear that the University will not be taken seriously in its efforts to tackle climate breakdown whilst it receives research funding from and remains invested in fossil fuel companies which continue to extract new reserves of fossil fuels and lobby against restrictive government legislation.

We will keep pushing for real change:

The CUSU Ethical Affairs Campaign have long been campaigning for the University to commit to carbon reduction targets in line with climate justice. Through student pressure and representation on University committees we have achieved some real progress. The University adopted these targets in direct response to collective student action over many years. We take encouragement from these small wins, and will keep doing everything we can to get the University to take real action.

We demand a 2030 zero carbon target and a commitment to full divestment from fossil fuels.