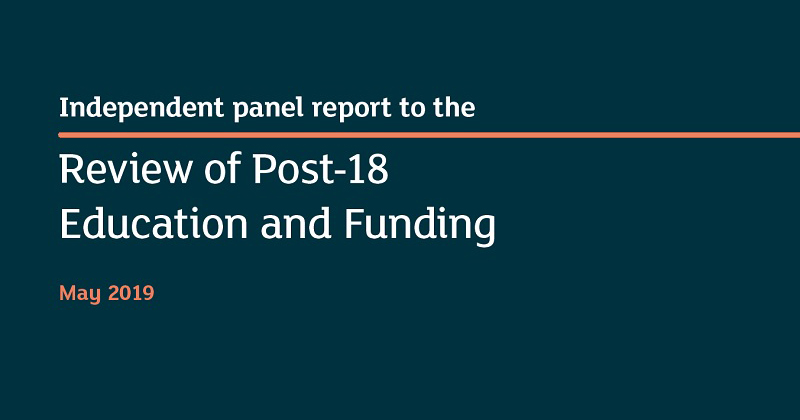 On Friday 31st May, the Independent panel report to the government’s Review of Post-18 Education and Funding was released. This report, referred to as the Augar Report, contains the panel’s recommendations for the future of Further and Higher Education funding, and is based upon the scope provided by the government and the consultation responses provided by sector institutions and organisations, including CUSU. (You can read CUSU’s responses to the consultation document’s questions here)

While it remains unclear whether the report’s recommendations will ever be enacted, we have decided to break them down and examine what they would mean for Cambridge students.

The headline recommendation from the report will be the suggestion that the maximum home student fee level for undergraduate degrees be reduced to £7,500, from its current level of £9,250. In our response to the consultation, CUSU criticised the limited scope of the review for not considering options beyond a fee-based system, given our policy position in favour of education funded through progressive taxation. While we are not in principle opposed to a reduction in fees, the particulars of this proposal, which also suggest lengthening the repayment period from 30 to 40 years, would result in wealthier graduates paying less over their whole career, with graduates on lower salaries paying more. Any fee cut based on a model that would be more regressive in overall impact is one that fails to respond to the serious criticisms of the current system.

However, there are some positive proposals in the report, most notably that government should restore, and extend to Further Education, maintenance grants for socio-economically disadvantaged students in order to prevent these students needing to take on larger loans than their peers. We also approve of the recommendation that the expected parental contribution to student maintenance is made explicit to applicants in the future, rather than assumed at present. While only a minor change, the assumption of understanding the parental contribution expectations has left some students with minimal maintenance funding to support their course.

We are glad that, despite substantial rumours to the contrary, the proposals do not include the suggestion to enforce differential tuition fee caps by subject, with the expected result that STEM degrees would incur higher fees than degrees in arts, humanities or social science disciplines. We believe such a change would have the effect of discouraging students from economically disadvantaged backgrounds from applying for the courses with higher fees.

However, in place of this suggestion, the report recommends differential levels of government funding for courses based on “to reflect more accurately the subject’s reasonable costs and its social and economic value to students and taxpayers”. While the principle of funding courses based upon their reasonable costs is largely unobjectionable, we are concerned by the notion that government will assess the “value” of degree courses to society in deciding their funding. This represents a further move towards the market guiding the direction of education, and in fact undermines the equality of “student choice” that the government has so far claimed to value.

At CUSU, we reiterate our belief that education should be funded through progressive taxation of the wealthiest in society, and should be accessible regardless of social background. While there are some positives to be taken from the Augar report, no significant moves towards these ends is being proposed.