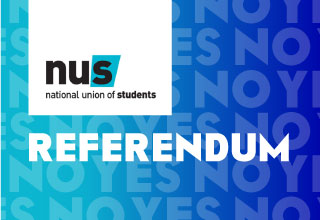 The timing of the NUS Referendum was subject to the Motion passed by CUSU Council on 2nd May, which called for the Referendum to take place “before the end of the academic year”, which is being met.

The quorum for the Referendum is outlined in the Constitution and thus must be followed. It is worth noting that these arguments were not made with the Disabled Students’ Officer Referendum, which required the same quorum (a simple majority of at least 10% voting in favour) to pass. While this quorum may look to be high (and is certainly something which CUSU’s Union Development Team is looking at with regards to upcoming Constitutional changes), 4/7 of past referenda have reached the quorum.  It would not be democratic for the Elections Committee to be able to alter the Constitution on a whim, therefore we are upholding this.

The Education Act 1994 states the following:
“There should be procedures for the review of affiliations to external organisations under which–

The Act does not require a specific vote on re-affiliation each year. It requires that we present a list of affiliations to our members for their approval each year. The Annual Budget presentation and ratification include a list of our affiliations and the amounts CUSU pays in affiliation, and has been approved annually. We have not, therefore, become disaffiliated by default through the Education Act 1994.

Elections Committee has not released any views to either side of the Referendum and has taken steps to publicise neutral information alongside materials for and against.

CUSU, and the Elections Committee, is dedicated to running a fair, open and democratic referendum and we are resources to Colleges, emailing all students, and engaging with students to encourage them to vote.

As with all formal complaints, CUSU Elections Committee has made a final ruling on this matter (included below). As outlined in the Referendum Rules, the complainant(s) now have the opportunity to seek appeal from the Junior Proctor.

We remain enthusiastic that students are engaging with the democratic processes of debate within the Students’ Union and encourage students to engage with the debate surrounding CUSU’s future with or without NUS, as opposed to the framing of the question.