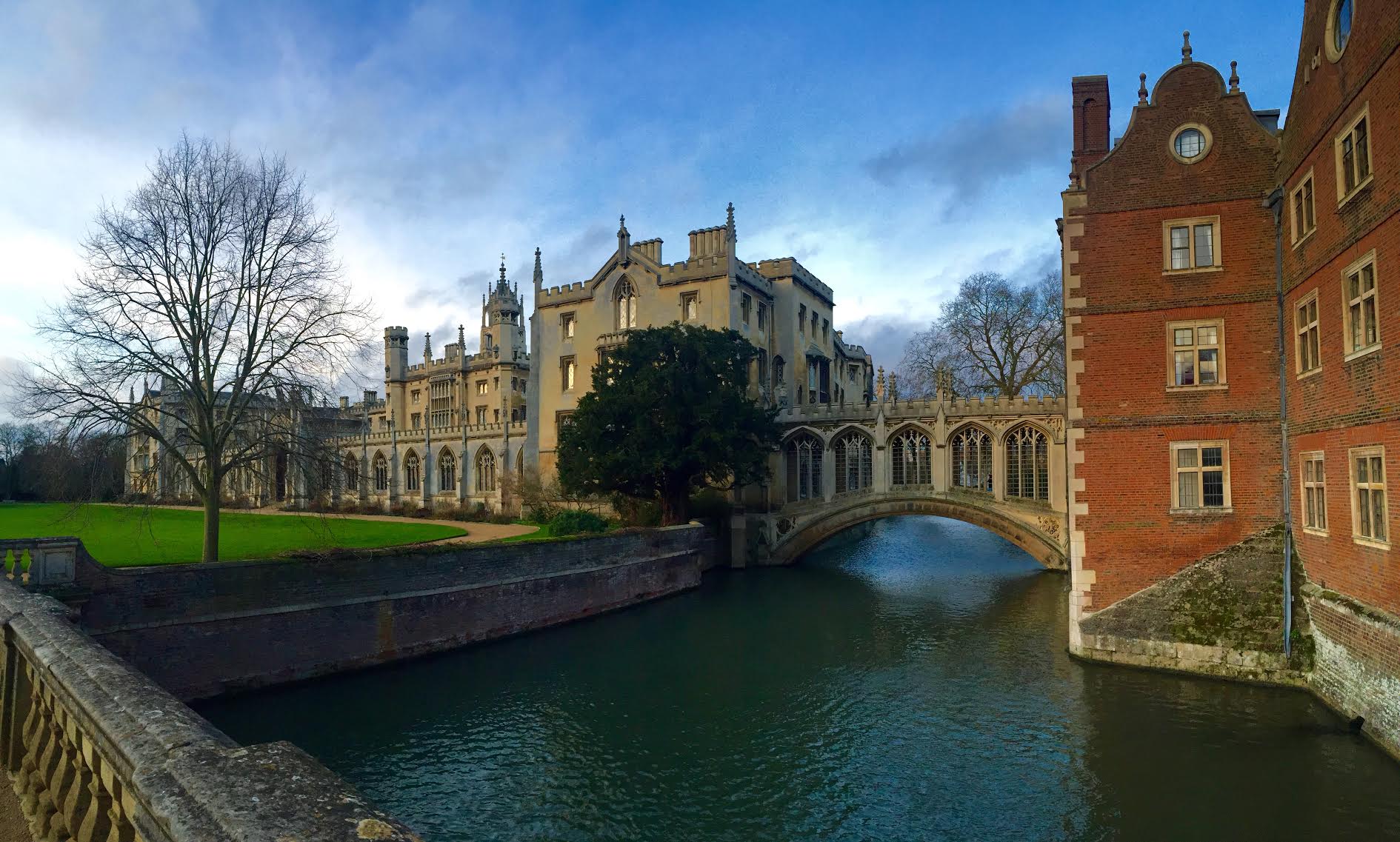 Every year, hundreds of potential Cambridge applicants and current Cambridge students take part in the CUSU Shadowing Scheme – the most popular of CUSU’s Access activities. This January and February, over three weekends (Thursday to Saturday), more than 350 sixth formers and mature students from backgrounds without a tradition of university entry were invited to stay in a Cambridge College and each accompany a current undergraduate to lectures, supervisions and social activities. We hope everyone who came on the Scheme enjoyed their insight into student life and got to see Cambridge beyond the negative myths that often surround the university. A big thanks to all the Cambridge students who took part as mentors!

Before we start organising next year’s CUSU Shadowing Scheme, we’re rounding off the 2016 Scheme in a very exciting way – judging its Diary and Photography competitions! Shadow students were encouraged to submit photos and write-ups of their time on the Scheme, and the entries that we received were amazing. A big thank you to the judges: the photographer Sir Cam and Tom Almeroth-Williams, the University’s Communications Officer for Education and Access.

We had a brilliant time judging the entries. Cambridge buildings may have been photographed time and time again, but the shadow students were really creative – quite a few used effects and angles that brought something new to our historic buildings. We were struck by the level of insight in the diary entries, which came through as the writers considered each aspect of university life. It was great to read about participants comparing their prior expectations of Cambridge with the discovery that the ‘Cambridge stereotype’ in no way dominates or reflects the vast majority of lives here. Dominic, our runner up, says it all:
“There are certain things a person can’t do in good conscience anymore after having gone to Cambridge. They can’t be a cynic, seeing all the students will quickly dispel that. They can’t question the value of a university; it’s in every conversation on everything from [Nicki] Minaj to Marlowe. They can’t waste time; there are far too many plays to write and music-related debates to be had for that. And they can’t be satisfied with not knowing things, with not being curious …”

So keep reading on, as I am now thrilled to introduce our winning photo entry, by Silas (top left), and the winning diary entry, by Shabnam (below). Also check out the links to all the diary and photography competition entrants at the bottom of the page:

“Before going to the Cambridge shadowing scheme 2016, I expected Cambridge to be full of posh, arrogant and obnoxious people. People who feel superior to everyone else. People who have all been privately educated. And people who have completed twenty GCSE’s, ten A-levels and tons of work experience. However, this was not the case at all!
Upon arriving at Cambridge, after an exhausting 3 hour journey, I was picked up by members of the student union who were very friendly. I then joined the rest of the shadows to an introduction talk at Emmanuel College. After being much intrigued by the rules and regulations, I met my mentor at Sidney Sussex College. She was very nice and outgoing. I knew we would get on with each other, the minute we met.

My mentor then took me along to a medical supervision. I was in a small room with 3 other second year medical students, with a supervisor firing questions at them about bacteria. Most people would think ” what else is there to know about bacteria, other than knowing that they are horrible things that cause diseases?” However, I was too interested to even think that. Even though I did not understand most of the words that they were using, I really enjoyed the environment that I was in. Being in small groups, means that you can express yourself and your understanding on different subjects, and you don’t have to get worried about giving wrong or stupid answers. Also, I went the local library at Robinson college and read part of a book on the human anatomy. A lot of it included diagrams, making it easy to follow. From this, I learnt that enthusiasm is key to success. This is because you need to be enthusiastic about your chosen subject to be able to talk about it and discover new things. Then again, the essay writing seemed to be rather stressful, and especially when you have 4 or 5 to do every week. That’s when enthusiasm solves the problem!
During the breaks and walks to different places, I got a glimpse of Cambridge and its beautiful buildings, most of them being part of the university. I couldn’t miss the myriad of bikes scattered all over the city either. But when I was there, I felt a sense of liveliness and warmth that I have not felt in many places.

For dinner, we went to Trinity college. I felt like Hermione Granger, sat at those large, long wooden tables at Hogwarts. The architecture was beautiful and the ceiling was just as stunning. Being an A-level historian, I even spotted a portrait of Henry VIII, which helped me to understand Tudor propaganda even more. Who wouldn’t want to stare at a portrait of Henry while enjoying a three-course meal? At the meal, I got to spend time with my mentor and the other shadows and mentors from Sidney Sussex college which was very fun. My mentor told me about all the different traditions in different colleges. For example, Robinson college (well known for its red bricks) is much more informal and students eat in the cafe, but Sidney Sussex is more like Kings but less grand. Therefore, there will always be a college for you, whether you like the grand surroundings or a more casual environment. From this experience, I learnt more about myself and that a formal environment would suit me. This helped me to decide which colleges I will consider applying to.

I had been exhausted that day from the journey to Cambridge and the endless walking. I went straight to my bedroom upon reaching my college; a cosy guest room on the top floor of the building, giving me a lovely, bright view to look at.
The next morning I met my mentor in the dining room at Sidney. We had a tasty, cooked lunch together. We then had a lecture to attend at 8.45. Upon reaching the lecture hall, I was surprised by how big it was, the number of students present and its contrast to the supervision. Learning about motivation and the role of the hypothalamus in sex, was very interesting but at the same time very challenging. I then went to another lecture which was about schistosomiasis (blood flukes), this one being more in depth. Attending lectures taught me that I would have to consistently pay attention, make lots of notes and change my routine of going to sleep in A-level chemistry lessons.

My mentor then took me on a tour around Cambridge. The community was vibrant with people from all sorts of social and cultural backgrounds which I was not expecting. You cannot miss the chapel, a true architecture wonder. The atmosphere is uplifting all around. This tour was the highlight of my trip. I already knew what a medical degree would entail, but this city and the lifestyle cannot be described in words and have attracted me even more.

I visited the beautiful Fitzwilliam museum and then went to a ‘Life as a medical  student’ introduction at Addenbrookes hospital. Everything was very practical. I got the chance to test peoples’ blood pressure and do a cardiac examination which was very fun. We then received a talk from a consultant on medical school admissions. This was very useful because it made me realise that you need more than knowledge to become a doctor.

After grabbing a quick subway with my mentor, I watched a student comedy at Pembroke Cellars.  It was absolutely hilarious and we had a great time. After a busy day, I was ready for bed again.

My least favourite moment was going home the next day. We had an exit session at Emmanuel again, and also a talk from an admission tutor.

I had an amazing time on the shadowing scheme and it has made me want to study medicine at Cambridge even more. I learnt that nobody is arrogant, obnoxious and has 20 A-levels. Well, most people are not! It has also made me realise that you do not need to come from a wealthy family or a private school to study there; if you are dedicated and hardworking, then it can be the place for you. It is now my aspiration and goal to study medicine at Cambridge!”