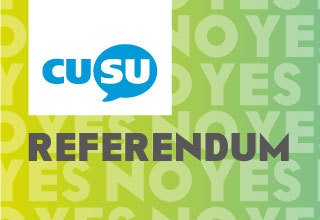 Following the close of the voting period, the CUSU Elections Committee would like to formally confirm the results for the CUSU Disabled Students’ Officer Referendum.

Members of Cambridge University Students’ Union were asked the question “Do you accept the proposed constitutional changes, which would add a Disabled Students’ Officer to the Full-Time Elected Officer Team?” over a period of seven days from the 27th January until the 3rd February, after a petition was received by CUSU Elections Committee calling for the Referendum with over 350 signatures.

CUSU Elections Committee would like to take this opportunity to thank all those students who voted in what is now the highest voter turnout in a CUSU Referendum in over 6 years. We would like to commend all those who campaigned for either side in the Referendum – the high turnout is in no small part down to the excellent campaigning techniques and dedication of those involved.

We will now be handing over the constitutional implementation to the Union Development Team – composed of Priscilla Mensah, CUSU President, Cornelius Roemer and Umang Khandelwal – who will liaise with the CUSU Trustee Board and the University’s Council Committee for the Supervision of Students’ Unions in order to implement the constitutional changes.