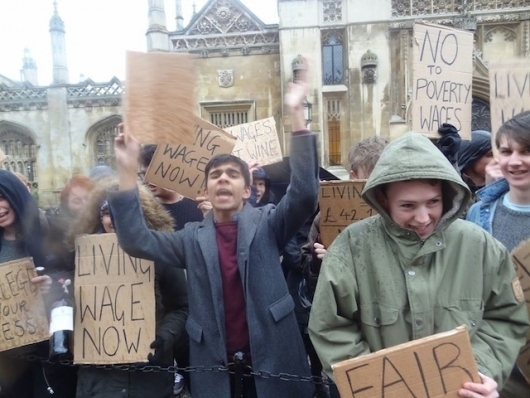 As of Friday 13th August, all staff directly employed by the University of Cambridge will be paid at least the living wage rate of £7.65 an hour. The move affects around 130 employees, according to a University spokesman.

The move has been described as a major victory for student campaigners. The decision, however, will not affect the university’s colleges, who employed a combined 1122 members of staff below the  living wage according to a Freedom of Information request in January.

Statement from Ben Bayley, on behalf of the CUSU Living Wage Campaign.

The students who have been involved in the campaign are delighted. We have worked tirelessly to keep the Living Wage issue alive for the past couple of years. We made sure that it could not be ignored. As a result, the extent of low pay has rightfully become a major embarrassment. The University seems to have finally decided that the money they save by refusing to give their workers enough to live on is not worth it after all.

As with any attempt to make changes in Cambridge, we still have to take on the colleges. This breakthrough ought to remove any defence for those which continue to pay below the £7.65 threshold. It is a sobering fact that there are a total of 1122 college employees still paid below the living wage (as of Nov 2013). Hughes Hall, Queens’ and St Catherine’s are the only colleges which currently meet the threshold. Murray Edwards and King’s have pledged to increase wages to this minimum level. Hopefully it’s only a matter of time before the others colleges follow suit.

Earlier this year, lecturers and other members of staff at the University of Cambridge went on strike in an ongoing dispute over a one per cent pay rise, which UCU say represents a real-terms pay cut of 13 per cent since 2008.

A Win for Students as DSA Cuts are Postponed!

Get Ready For Freshers Festival 2014